Note: The drought is over! This post, as you know, took entirely too long. Part of it was because it’s just a tricky song to talk about; part was garden-variety writer’s block; part was just general burnout and needing a break, but we’ve covered that. I won’t promise it will never happen again–because it will–but for the time being, I’m back on track. As usual, this will be exclusive to my Patreon for about a week before I put the full post up on the main blog. And, while we’re on the subject of patrons, thank you to Hayo Reinders, who joined Snax and Carlos Romero in supporting the blog last week and officially became the person to put it over the top for my $100 goal. That means I’d better get started thinking up podcast ideas; if you have any you’d like to share, hit me up. I will aim to get the podcast up and running again in February.

Of the 11 songs that would eventually make their way onto Prince’s fifth album, “Lady Cab Driver” appears to have had the longest gestation period. The song was completed at Sunset Sound on July 7, 1982, the day after “Moonbeam Levels”; but, as the recent deluxe edition of 1999 revealed, its seeds had been planted during a break in the Controversy tour over half a year earlier on December 8, 1981, in the form of a different song called “Rearrange.”

According to sessionologist Duane Tudahl in the Minneapolis Public Radio documentary The Story of 1999, “Rearrange” was long known to researchers by its title alone: “it was one of those songs that we’d heard existed, but I didn’t think it was actually a song,” he told host Andrea Swensson. “I thought it was just some shuffling of his stuff”–a studio note indicating a literal rearrangement of tapes. As it turned out, of course, it was real–though it was also little more than an admittedly funky sketch: a stark, mid-paced groove with a slick rhythm guitar hook similar to the Time track “The Stick.” Given this similarity–not to mention Prince’s guitar solo, which plays neatly to Jesse Johnson’s combustive style–it seems likely that “Rearrange” was at least provisionally mooted for that group. But this is just speculation; ultimately, says Tudahl, we “don’t know whether it was intended for 1999, whether he was searching for a voice for 1999, or whether he was saying, ‘I gotta record another Time album soon.’ But either way it was something that was not planned. He just thought, ‘I’m in the studio, I gotta record, I’m going to record. This is what I’m gonna do’” (Swensson 2019 Episode 2). 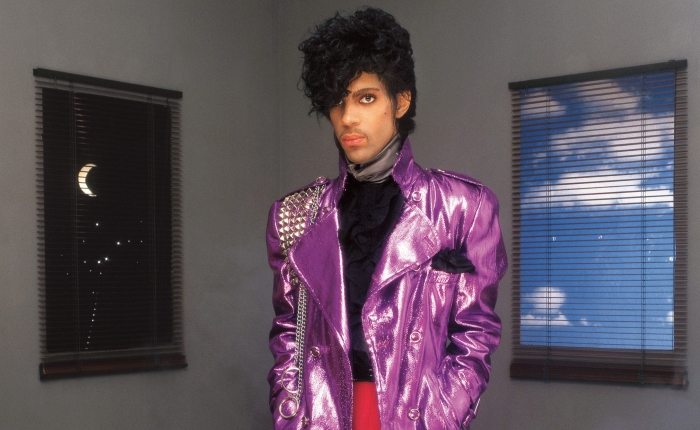 (Featured Image: Outtake from the 1999 photo sessions, by Allen Beaulieu; © the Prince Estate.)

Note: Incredibly, it’s been just over three years since I first wrote about “Moonbeam Levels” for dance / music / sex / romance. That post focused on the song’s status as the first posthumously-released track from Prince’s Vault, and was colored by the then-recent passings of both Prince and David Bowie, who I still consider to be an unsung source of inspiration for the song. You can still read that version if you want; but here is what I now consider to be the official d / m / s / r take on “Moonbeam Levels.”

In early July 1982, after spending the latter half of the spring back home in Minnesota, Prince returned to Sunset Sound in Los Angeles. His goal, almost certainly, was to put the finishing touches on the album that would become 1999. But in typical fashion, he overshot that goal: instead, launching himself into the stratosphere with the appropriately extraterrestrial outtake “Moonbeam Levels.”

In some ways, “Moonbeam Levels” feels very much of a piece with the other songs Prince was recording in mid-1982. Like many of the tracks that would end up on 1999, it opens with a prominent Linn LM-1 beat: in this case, the mechanical pulse of a bass drum, punctuated by a hiss of synthesized exhaust. To this futuristic foundation, Prince adds Blade Runner synth pads and lyrics evoking space travel: his narrator fantasizes about “a nice condo overlookin’ the rings of Saturn” and asks for the titular “moonbeam levels,” a poetic turn of phrase that conjures up images of interplanetary transmissions and cosmic rays. Meanwhile, the ever-present threat of annihilation looms: Prince imagines a never-written novel with the capsule summary, “Boy loses girl in a rainstorm, nuclear World War III,” his pet themes of personal and global apocalypse summed up in a single, devastating line. The whole package feels custom-built for precisely the kind of science-fiction pop-funk epic Prince had spent the past six months assembling piece by piece.

END_OF_DOCUMENT_TOKEN_TO_BE_REPLACED

(Featured Image: The Time’s Morris Day and his sparring partner, the Artist Formerly Known as Jamie Starr, circa 1982; photo by Allen Beaulieu.)

The Time’s second album, What Time is It?, was released on August 25, 1982–just two weeks after the self-titled debut by Vanity 6. It easily outperformed both Vanity 6 and the Time’s own debut, and effectively tied with Prince’s previous album Controversy: peaking at Number 26 on the Billboard 200 and Number 2 on the Black Albums (recently renamed from “Soul”) chart.

Despite their success–or, more likely, because of it–Prince was determined to keep the spinoff group in their place. Studio tech Don Batts recalled him showing up to one of the band’s rehearsals with a rough mix of the finished record: “He threw the cassette at [guitarist] Jesse [Johnson] and said, ‘Hey man, you play really good on your album,’” Batts told biographer Per Nilsen. “That kind of comment, it was like saying, ‘Hey puppets!’” (Nilsen 1999 108).

More than anything, though, Prince kept his grip on the Time’s strings by saving their best material for himself. It’s hard to hear What Time is It?’s underwhelming closing track, “I Don’t Wanna Leave You,” without imagining a stronger alternative in its place: something that would end the album with a bang, rather than a whimper. Something, that is, like “International Lover,” which Prince had originally conceived for his side project back in January before poaching it for the finale of his own forthcoming album.

END_OF_DOCUMENT_TOKEN_TO_BE_REPLACED

(Featured Image: Dez Dickerson shoots Prince a bemused look, not for the last time, at the 1982 Minnesota Black Music Awards while Brown Mark looks on; photo stolen from Housequake.)

When he wasn’t busy upgrading his home studio and recording his first Top 10 hit, Prince spent the better part of May 1982 soaking up some long-awaited hometown acclaim. On May 12, he attended the inaugural Minnesota Black Music Awards at the Prom Ballroom in St. Paul, where he was honored in the “Rhythm & Blues” category alongside protégés the Time and fellow-travelers including Enterprize, Pierre Lewis and the Lewis Connection, and Sue Ann Carwell. According to biographer Per Nilsen, his acceptance speech was delivered “in such low tones that no one could hear him” (Nilsen 1999 100).

Two weeks later, on May 24, he was back at the Prom–which, the Twin Cities Music Highlights website ominously notes, “refused to turn on the air conditioning”–for the second annual Minnesota Music Awards, sponsored by the alternative weekly City Pages. Prince was nominated, either himself or by proxy, in eight categories: Best 45 or EP (“Controversy,” the Time’s “Get It Up”), Best LP (Controversy, The Time), Best New Act (the Time), Best Electric Guitar (Dez Dickerson), Best Male Vocalist (himself), Best R&B/Funk/Soul/Band (the Time), Best Producer (himself, for Controversy), and Musician of the Year (himself). The night’s big award went to him; this time–maybe because he’d just recorded “Little Red Corvette” four days earlier–he accepted it with a little more swagger, asking, “When do they give the award for best ass?”

Memorable quips aside, Prince didn’t actually perform at the Minnesota Music Awards ceremony; but the Time did, making their first public appearance since the end of the Controversy tour two months earlier. Seeing his side project in action again–and watching them take home the R&B/Funk/Soul award–may have been what prompted Prince to get back to work recording their second album, which he’d left in a state of suspended animation since his sessions at Sunset Sound in January. Those sessions had produced “The Walk,” “Gigolos Get Lonely Too,” and “Wild and Loose,” all of which made it onto the final track list; as well as “Bold Generation” and “Colleen,” which did not. An early version of “Jerk Out,” which the group would ultimately re-record for their 1990 album Pandemonium, was also mooted and discarded around the same time. But it was “777-9311,” recorded in late May or early June at Kiowa Trail, that gave the nascent album its linchpin.